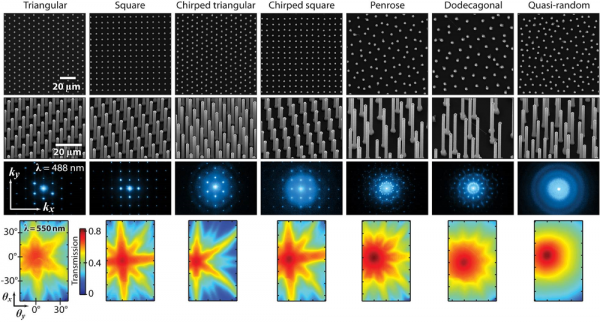 Widespread adoption of solar energy faces several barriers, most notably the cost of modules and installation. Researchers in the Atwater Group are addressing these barriers by using silicon, the material used in most conventional solar panels, in a new way. By embedding tiny silicon wires in a polymer, they are able to create lightweight, flexible solar cells.

These silicon wires, 1/100th the size of a human hair, are literally grown from the surface of a silicon wafer using an inexpensive chemical vapor deposition process. Following removal of the wires from the wafer surface, the wafer can be cleaned and used again for another growth. Due to the small size of the wires, the extreme purity requirements of a standard solar cell can be relaxed while still achieving high efficiency. This allows for the use of low cost materials – in fact, the silicon input gas is generally considered a waste product of the semiconductor industry!

Researchers are currently looking at new ways to achieve even higher efficiencies using this award winning technology. The unique structure makes the silicon wires a perfect foundation for the growth of other materials on top, or for use in creating chemical fuels directly from sunlight.

A leaf is the building block of life, harvesting the sunlight that hits it into a continuous source of energy for sustaining the life of itself and the cascading food chain that depends on it. Replicating these essential features in a solar fuels producing artificial leaf for supporting our energized world is exactly what the researchers in the Atwater group are working toward.

Solar fuels have the opportunity to replace fossil fuels as a continuous, on-demand, carbon neutral energy source for humanities needs. Hydrogen production via water splitting and CO2 conversion into fossil fuel like molecules represents two routes researchers are focused on to achieve this goal. These routes include multicomponent development of semiconductors for light absorption and electricity production, catalysts to increase the reaction rate for improved efficiencies and membranes that provide ionic transport and separated product collection. Integration of these multiple components into a single device is a key focus because this enables increasingly simple designs and improved economics. 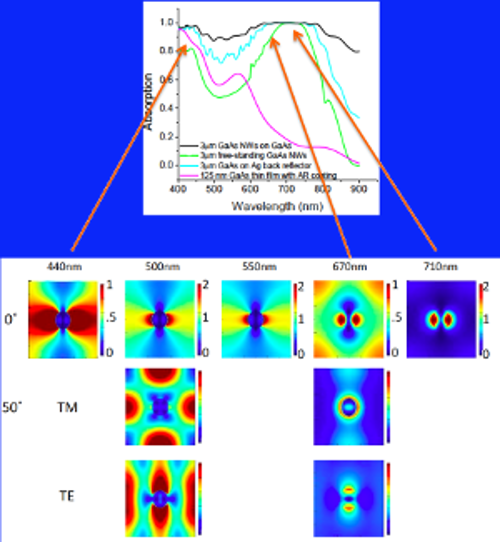 The performance of silicon microwire devices is limited by silicon’s materials properties. Every semiconductor can only absorb light with energies above a fundamental value. Any excess energy, however, is not converted. Capturing a portion of this lost energy can be done by using different materials in a “multi-junction” solar cell design. The Atwater Group is investigating the growth of the “III-V” material family (comprised of combinations of Group III and V elements from the periodic table, such as GaAs, InP, and GaN) directly on flat and microwire silicon as a route to improved performance.

III-V’s possess many useful materials properties. They can be combined as alloys to allow for the tuning of the light absorption across the entire solar spectrum, and many of these alloys are very efficient light absorbers. Growth of these alloys typically requires III-V crystalline wafers which are extremely expensive, so by switching to silicon the cost can be drastically reduced. However, III-V growth on silicon presents new challenges due to differences in chemistry and structure.

Researchers in the group are focusing on two ways to integrate III-V’s on silicon. First, by growing these materials on silicon microwires, the excellent optical properties of the wires can be coupled with the new performance opportunities afforded by III-V’s. Second, in a fashion similar to the silicon microwires, III-V nanowires can be grown directly on silicon, and they also have remarkable optical properties ideal for solar cells.