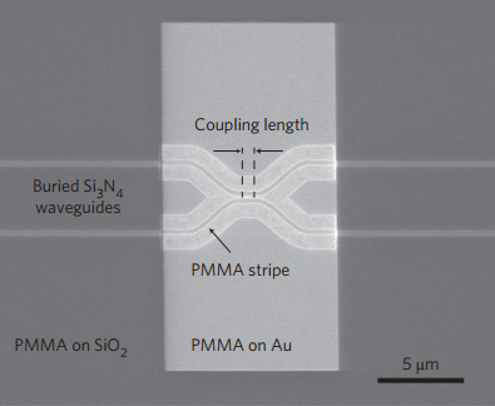 Silicon nitride waveguides deliver pairs of photons to a directional coupler made of DLSPPWs.

Surface plasmons involve the collective motion of many billions of electrons in unison, but in quantum theory they behave like single particles with only a few degrees of freedom.  Like photons in free space they have exhibited many familiar quantum phenomena, including antibunching (an indication of single-particle statistics), entanglement, and quantum interference.  Unlike free-space photons, though, they can be confined to nanometer-scale volumes and engineered to interact strongly with quantum emitters like single atoms, molecules, and quantum dots.

Experiments in recent years have tested this analogy between photons and surface plasmons, confirming that surface plasmons do indeed exhibit single-particle statistics when excited by single photons and that they can be entangled by polarization or frequency. Researchers in the Atwater group study the quantum properties of surface plasmons both for fundamental insights into their physics as well as for applications in quantum information science.  Theorists in the group investigate the behavior of quantum emitters embedded in plasmonic materials and devices designed to have exotic properties, like a refractive index near zero, looking for changes to their emission spectra, dynamics, and quantum correlations.  Experimentalists in the group study quantum interference and entanglement in plasmonic waveguides, examining the effects of their strong dispersion and dissipation on the visibility of these phenomena.

To this growing body of experimental evidence supporting the quantum theory of the plasmon, researchers in the Atwater Group have contributed observations of plasmonic quantum interference, with 93 +/- 1% visibility, and path entanglement, with 95 +/- 2% visibility.  The former result shows that pairs of initially identical photons remain indistinguishable and suffer no extra dephasing as they are converted to plasmons, while the latter result suggests that they do not even interact strongly enough with the metals that sustain them to leave behind a record that they had ever existed.

Atwater Group researchers are also studying the potential applications of plasmonic structures to problems in quantum information processing.  Plasmonic waveguides, resonators, and metamaterials offer substantial control over the electromagnetic environment around single-photon emitters, allowing their interactions with each other and with the outside world to be engineered.  Careful design of these structures could enable single-photon sources and quantum optical logic elements.